2018 Financial statements, a continuing positive trend for the Cefla Group 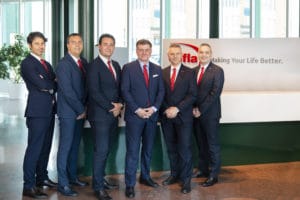 Another year of growth for Cefla. The group’s turnover increases to over 560 million euro with an Ebitda margin of nearly 9% and a Net Income of over 30 million euro

IMOLA (Italy),7 June 2019. 2018 was a very positive year for the Cefla group and its 5 Business Units (Engineering, Shopfitting, Finishing, Medical Equipment and Lighting), despite the uncertain global situation. The Cefla group didn’t take a back seat, on the contrary. Each of the company’s Business Units acquired important contracts and at the same time continued with a strategy of investment and internal reorganisation aimed at being in the best possible position to face the challenges of the present day and of the future.

The results of the Medical Equipment and Finishing Business Units in particular reached record values both in terms of volumes and profitability. The contribution of the Engineering BU (formerly Plant Solutions) was also significant and the newly formed Lighting BU’s performance was extremely promising. 2018 was a particularly critical year for the Shopfitting BU, due to changes in the world of retail. A series of initiatives were set up however, with the aim of improving operational efficiency, increasing competitiveness in the main international markets and to guarantee economic and financial stability. Overall, 47% of income was generated in Italy, 30% in other European countries and 23% in the rest of the world.

The consolidated Ebitda, equal to around 50 million euro, allowed for a positive cash flow, net of investments – entirely self-financed – of more than 30 million euro, especially from the Finishing BU (with its new range of roller machines and the new ExyDry-Z oven with excimer technology) and in the Medical Equipment BU (which has a renewed range of dental units and new products for imaging and sterilisation). On the year closing date the Net Financial Position of the group registered a positive balance of 21 million euro, an improvement compared to the 13 million of 2017, while the Net Income was equal to 30 million euro (+ 8.1% compared to 2017). In 2018, in addition to the organic growth, there was expansion by external ranges, which included the acquisition of Biosaf In, a company that produces orthodontic implant systems, and Lucifero’s, specialising in the design and creation of lighting fixtures for architecture.

During the Shareholders’ Meeting of 31 May, which saw the approval of the 2018 Financial Statements – that was drawn up in conformity with the IAS/IFRS international accounting standards – the entire Board of Directors was reconfirmed, including the relative leaders: Gianmaria Balducci as President and Claudio Fedrigo as Vice president. “The Board of Directors would like to thank the shareholders for their belief in us and also thank all of our colleagues within the Cefla Group who, with their daily work – in the offices, on the assembly lines, at building sites and at our different premises all over the world – have made it possible to translate the strategies of the managerial group and the guidelines of the management team into numbers,” declared the President, Gianmaria Balducci.

Most of the aims established at the beginning of the year have been reached and surpassed thanks to constructive discussions between shareholders, employees and managers and to the participation of everyone present within the company. The instability of the macroeconomic scenario requires a continued focus on cost structure, whilst in 2019 all of the BUs will continue to develop the activities included in the 2018-2020 Business Plan along the growth guidelines: internalisation, digitalisation and servitisation. “Over the coming years, Cefla will continue to be able to count on the company’s distinguishing values, which have guided us since 1932. These values, independently of which sector they come from, push us to make constant improvements in our unstoppable effort to create value, that are coherent with our mission of improving people’s lives,” concluded Balducci.

CEFLA is a multi-business Italian group, founded in 1932 in Imola (Bologna) where it has its head offices and several large manufacturing facilities all over the world. The Group has some thirty facilities (of which about half engage in manufacturing) in numerous countries. Cefla operates in the following specific business areas: ENGINEERING (plant engineering in the civil, industrial and energy sectors); SHOPFITTING (shop equipment and personalised solutions for Retail and Contract); FINISHING (machines and complete plants for coating, finishing and digital printing); MEDICAL EQUIPMENT (for the dental and medical sectors); LIGHTING (company specialising in the development of LED technology). Cefla’s strength stems from its founding principles: strategic vision and internationalisation, investment in technology and innovation, equity-related and financial solidity for a constant and profitable growth. For more information see www.cefla.com