Cefla, 2015 a year of growth. Balducci re-appointed as Chairman

– At the bottom of the news you may find the statement in letterhead and a picture of the president, Gianmaria Balducci –

The positive trend continues, with the value of production exceeding 443 million. Since 2012 net income has almost quadrupled. Performance fuelled by investments in product and process innovation.

During the course of the meeting, which took place on 30 May 2016, Cefla’s shareholders also appointed a Board of Directors which will remain in office for the next three years. Heading it will be Gianmaria Balducci, re-appointed as Chairman by the Board, which met the day after the shareholders’ meeting. The new Board, which boasts a young average age (46 years) consists of: Claudio Fedrigo (deputy Chairman), Yuri Della Godenza, Nevio Pelliconi and Cristian Pungetti.

Hence, in addition to the Chairman, two directors were re-appointed to ensure continuity (Fedrigo and Pelliconi), to whom Cefla’s shareholders expressed appreciation for their work to date. On the other hand, two were newly appointed (Della Godenza and Pungetti), replacing the same number of directors (Luciano Poggi and Fabio Pasini) who had reached retirement age.

“We are very satisfied,” commented the Chairman Gianmaria Balducci, “by this performance that confirms the upward trend that commenced four years ago. From 2012 to 2015 the value of production grew by 100 million and shareholders’ equity grew by almost 17 million. A result that is due to the huge commitment of the many people who work in our company and to the significant investments, in product and process innovation, that have enabled us to anticipate the trends and confirm us as a key player in the market in which we operate.”

Also important was the effect on employment for the area around Imola, where Cefla has its general headquarters; “During the period 2012/2015,” pointed out the Chairman, “we took on 100 new employees and today more than 1,000 people work at our Imola premises, out of a total of about 1,800.”

Cefla operates in different markets through four Business Units (Finishing, Plant Solutions, Medical Equipment and Shopfitting) which remain inter-related through a continuous exchange of knowledge. In this way the progress made in Research and Development is shared and create value for the entire system, at the same time opening up new business opportunities. An example of this is C-LED, a new Cefla company created out of the experience gained in the medical field, which addresses businesses operating in the industrial LED lighting, visual merchandising, interior design and public (outdoor) lighting sectors.

These are some of the product innovations currently being marketed by Cefla:

– The Finishing Business Unit’s iGiottoApp X2, which makes the best use of two anthropomorphic robots for painting surfaces controlled by innovative new anti-collision software;
– The Shopfitting Business Unit’s Smart Shelving System, a combination of technical solutions and communications technology that is evolving proximity marketing in retail sales areas;
– The Medical Equipment Business Unit has presented the new 3D/2D Panoramic MyRay X5, an innovative CBCT device, NewTom 5G XL, dedicated to hospital applications and the new Victor Dental Equipment V586;
– The Plant Solutions Business Unit has completed some highly significant projects in the civil and industrial fields. Outstanding among these is the installation of all the plants for the Allianz Tower in Milan, which at 207 metres is the highest in Italy. Cefla designed and supplied the mechanical plant and, being also involved in energy efficiency, plants for cogeneration, with particular attention to trigeneration, and hence the production of cooling capacity.

Cefla is an Italian multi-business organization, founded in 1932 in Imola, where it has its head offices and large-scale production facilities. The business is strongly established at international level and can count on some thirty branches (of which about half are manufacturing facilities) in several countries, employing nearly two thousand people. Cefla does business in four specific areas: Cefla Plant Solutions (civil and industrial plant engineering for the energy sector); Cefla Shopfitting (shop equipment and customised retail outlet solutions); Cefla Finishing (machines and complete plants for coating and finishing); Cefla Medical Equipment (equipment for the dental and medical sectors). Cefla’s strength comes from the principles that have been its hallmark since it was founded: strategic vision and long-term planning, investment in technology and innovation, financial soundness. Corporate web-site: cefla.com 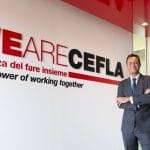